Estella Williams, 91, puts her custom orange reflector vest on her shoulders and str-olls out into the middle of a five-lane highway. Right outside of Westside High School, Williams directs traffic in the mornings and afternoons on Pearman Dairy Road, streaming with semi-trucks and speeders. 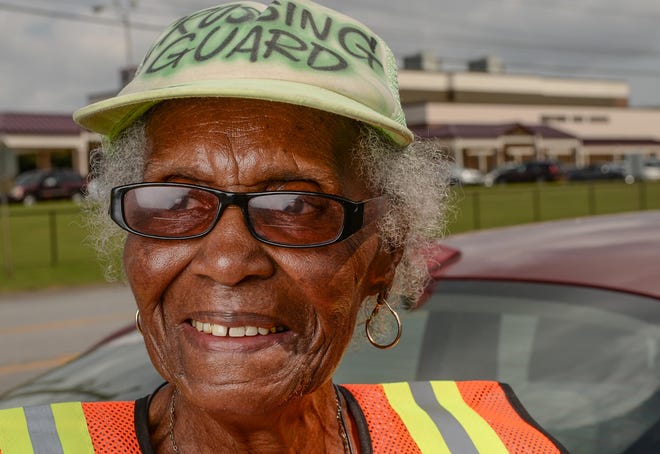 The breeze from the cars sometimes pops up her vest, and she waves at drivers with her reflective gloves, holding a stop sign on a small stick. An airbrushed neon green cap on her head, a big smile and sunglasses complete the look.

Her second career as a crossing guard, after three decades cleaning at Michelin tire plants, put her back around cars. More than a quarter of a century ago, Williams started this as a favor for one of her sons-in-law.

She’s got a lot of those. Williams said she would guess she’s been a mother or mother figure of some sort to more than 1,000 children. One time she went to a graduation ceremony at Tuskegee University in Alabama. The traff-ic was so backed up that she decided to get out and pi**h in. 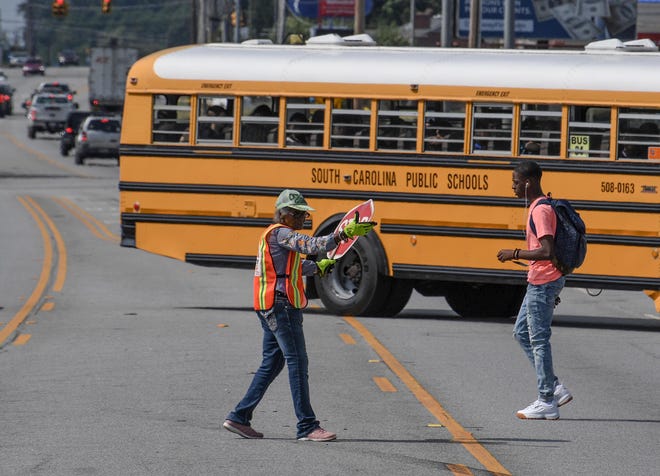 “She’s dressed up, with her heels on, and the lady can dress up,” said Terrial “ET” Williams, the 15th of her 18 children. Once the traffic was flowing again, Estella Williams was back in the car.

That’s the kind of ethic that Williams passed down to her children and their children, honest and hard work with a big helping hand, Terrial Williams said.

Another one of Estella Wiliams’ children and three grandchildren came out Monday to cheer on their matriarch from the sidewalks. They’d laugh a bit when Williams yelled at cars. For her part, Williams said cell phones are the biggest problem with drivers. Her family members said they’ve seen her dance out of harms way, but Williams said she’s not worried about her safety. She knows the roads and the drivers and can hear problems in time to react.

High school students in their first-day clothes streamed out across the road in the afternoon, worn out from the day. Williams does this year in, year out, waking up every school day, rain or shine.

Sporting her orange reflective vest, she grabs her stop sign and marches into the middle of Pearman Dairy Road. It used to be a yellow vest but “The Today Show” hosts gave her a custom new orange vest this summer when she visited a live taping of the show. Williams was featured in a short segment outside the studio, and she was invited inside to see the rest of the show.

Seeing the show was on Williams’ bucket list, she said, and she got to meet her favorites: Savannah Guthrie and Al Roker. Back in South Carolina, Williams is preparing for what could be her last year as a crossing guard. Terrial Williams said he is going to keep trying to get her to stay home, but it’ll be tough. His mom won’t stop without a fight. She also works at Clemson University, directing traffic on football game days. She’s become so popular there that she gets a ride to the president’s box. She’ll spend most of the game in luxury before going back to her post and finishing out her traffic job.

When she isn’t waving down cars, Williams is a constant volunteer. She takes meals to Meals on Wheels clients. She volunteers at hospices. Through her church, Mt. Herman Baptist Church, she signs up for plenty of other causes. It’s best to be careful asking Williams for a favor, though. She follows through. This whole crossing guard thing started 26 or 27 years ago when one of her sons-in-law, Randy Clinkscales, had asked her if she could substitute for a crossing guard one day.

It was supposed to be temporary, a day or a weekend, and she was back to retired life. Except it wasn’t. Williams outlasted Clinkscales. “He’s retired now,” Williams said. “And I’m still here.”