A photograph of two Domino’s workers in the US has gone viral, as people call for high-er wages for essential workers. The picture shows two staff members, clearly exha-usted as they work through the winter st*rm which is currently aff*cting much of the country.

Food delivery services in many states have been disrupt*d by the icy weather conditions, with many places f*rced to close and workers unable to attend their jobs, while there have also been supply chain !ssu-es. 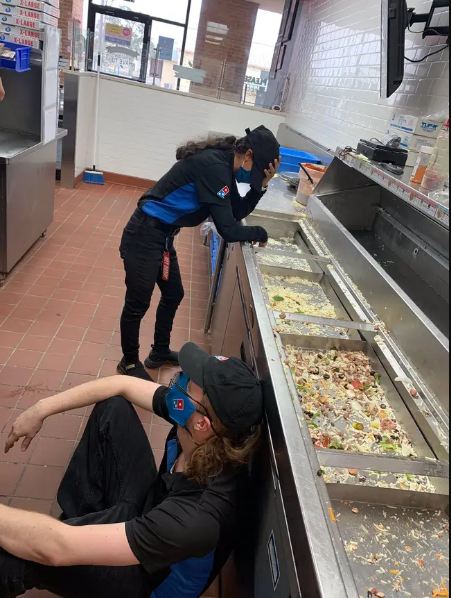 The photo was taken in San Antonio in Texas, which has been particularly impact-ed by the weather. It was snapped by a News 4 San Antonio viewer called Judy DeLuna, who wrote:

“This Dominos in San Antonio. Working during this cr*sis. “They had a weekend w*rth of food and it was gone within 4 hours. This team helped those that needed help. These are the essential workers that need recognition.

Viewer Judy DeLuna submitted this photo to @News4SA @KABBFOX29 of a @dominos in San Antonio. She says they had a weekend’s worth of food and it was gone in 4 hours. “These are the essential workers that need recognition,” Judy writes. Thank you for feeding your neighbors ? pic.twitter.com/DWZOegwEea

“They were the only pizza place open. Every pizza place was closed but dominos stayed open to help those in need.” After it was shared with the US broadcasting channel, reporter Emily Baucum shared it on Twitter and the response was immediate.

One person replied: “I used to work at Domino’s. Pe-ak hours I would slap out over 200 pizzas an hour. I’d go home with flour in my belly button.

“I work in health care now and the first thing I do when looking at applications is see if they have food service experience. They can hu-stle.” Someone else suggested: “$15 minimum wage now. None of you office types work as h*rd as fast food workers do. I know because I work in an office.

A third added: “Give them enough money to live if you give a s*** about the work they do. Recognition doesn’t put food on the table of the people feeding their neighbors.”