Nick Cannon’s phone has been ringing off the h*** since funnyman Kevin Hart posted his real phone number on billboards throughout Los Angeles, Atlanta and New York City. Hart shared a photo of the LA billboard on his Instagram page Friday, clai*ing the prank was retaliation after the “Wildin’ Out” host had a llama sent to his home the previous week for Hart’s 42nd birthday. 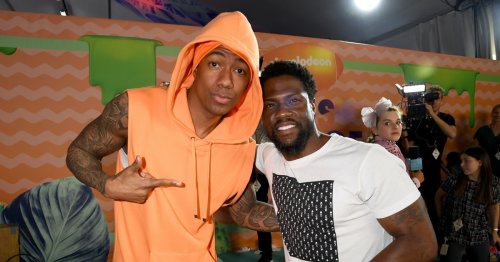 “Since my brother @nickcannon decided to buy me a lama for my B Day I decided to do something nice for him as well,” Hart captioned the photo. “….Here is a digital billboard in Los Angeles….I also did some in ATL & NY….if u want any advice on fatherho-od please call my BEST FRIEND @nickcannon ….I’m sure his phone has been ringing nonstop ?????? GOTCHA BACK BITCH #PRANKWARS.” The ad in question reads, “For any advice on fatherho-od, call my best friend Nick Cannon.” In a smaller font, it continues, “Hey guys! Here is his cell #,” adding the MTV star’s Los Angeles number for all to see. Hart’s “fatherho-od” talk is clearly in reference to Cannon having his 5th, 6th and 7th kid all within the last month.

Fans began hitting up the father of seven immediately, with Cannon playing the great sport by answering several calls and FaceTime requests from stunned followers who couldn’t believe they reached the television star. “How my day is going,” Cannon, 40, captioned an Instagram Story of his picking up at least 20 calls from fans, including callers from Zimbabwe and Nigeria. So many calls came in, that the phone’s caller ID picked up multiple numbers simultaneously.

“Look at that. It’s coming in double numbers at a time. It just won’t stop ringing, and now there’s a white screen,” Cannon said. “My phone is ruined!” Cannon went on to call Hart “pretty s–tty” for the prank, vowing to get the comedian back one day.