Michelle and Barack Obama really are the epitome of couple goals. To celebrate their 27th wedding anniversary, the former president and first lady shared touching, heartf-elt social media tributes to each other. Michelle posted a picture of the two hanging out in a beachside setting. Michelle posted a picture of the two hang!ng out in a beachside setting. (Our best guess? Their Perennial vacation spot, Martha’s Vineyard.) “27 years ago, this guy promised me a life full of adventure. I’d say he’s delivered. Here’s to our next chapter of becoming empty nesters and discovering what’s next—while still feeling the magic that brought us together all those years ago. Happy anniversary, Barack,” she captioned the snap. Over on Barack’s account, he shared a photograph of the two in what looks to be the African savannah. Their backs are to the camera, and both are wearing baseball hats. Barack wears a pullover, and Michelle has on an olive green safari jacket. The sun sets in the hor*zon as the two embrace. 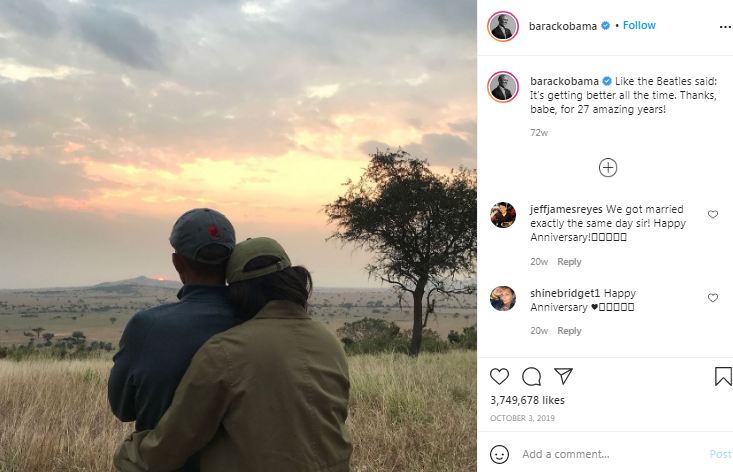 “Like the Beatl-es said: It’s getting better all the time. Thanks, babe, for 27 amazing years!” So, at what point during this did you mentally—or audibly—say “awww”? Was it Michelle’s “feeling the magic that brought us together all those years ago?” Was it Barack’s casual use of the pet name “babe”? Was it the images themselves? Or was it all of the above? (It was all of the above, wasn’t it.) Just like the anniversary itself, the Obamas social media tributes on October 3rd are an annual tradition. Like in 2017, when Michelle shared a throwb-ack picture of their wedding day for their 25th. Judging by the number of eff*sive comments left on Instagram, the internet never wants them to stop.