Simone Biles, on the eve of launching her bid to add to her four Olympic gold medals, showed that it isn’t only her love for glory on her mind. The 24-year-old US star from Spring, Texas, poured out her affection for NFL boyfriend Jonathan Owens who is back home in Houston, Texas. The football player is celebrating his 26th birthday with his girlfriend thousands of miles away preparing to strike gymnastics gold at the Tokyo Olympics. 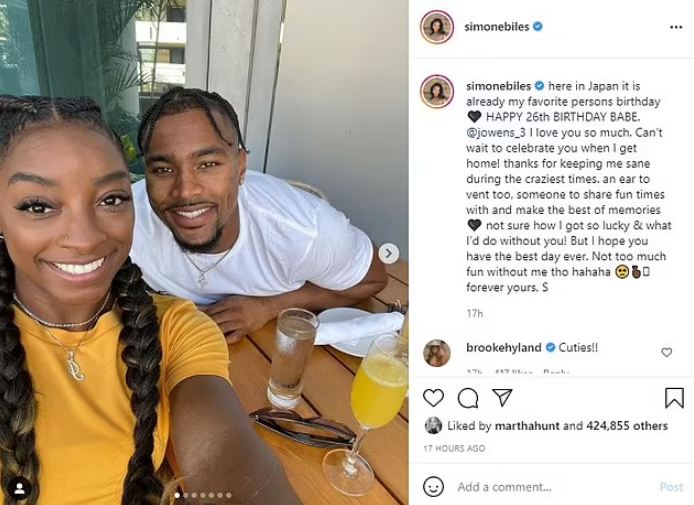 But Simone, who is staying in a hotel close to the Olympic Village, posted on Instagram today: ‘Here in Japan it is already my favorite person’s birthday. HAPPY 26th BIRTHDAY BABE. @jowens_3 I love you so much. Can’t wait to celebrate you when I get home!’

She continued: ‘Thanks for keeping me sane during the craziest times. an ear to vent too, someone to share fun times with and make the best of memories. not sure how I got so lucky & what I’d do without you!

‘But I hope you have the best day ever. Not too much fun without me tho hahaha forever yours, S.’ She showed she was in seventh heaven when it came to love for her boyfriend by posting seven pictures of them together. Earlier this month, Simone revealed how she met Owens after sliding into his DMs during the Covid pandemic.

She told WSJ. Magazine’s July digital issue how she saw the Houston Texans safety on social media and sent him a direct message that started their year-long relationship.

‘He would say I slid into his DMs. I saw him and I was like, “Oh, he’s pretty cute,” so I said hi…and then I saw that he was in the Houston area, so we started chatting a little bit, and then we went to hang out a week or two later,’ she explained. However, it was Biles’s sister Adria who pushed them together after about three weeks of watching them flirt. The two athletes were FaceTiming when Adria grabbed Biles’s cellphone and invited Owens to join them on a trip to a lake house.

Not only did Owens, 25, come, but he also brought his English bulldog Zeus, who got along swimmingly with Biles’s French bulldog Lilo.

The football player got the stamp of approval from the Bileses and was invited to join their Sunday-evening dinners when they started back up again later on in the pandemic. Owens has been by Biles’s side as she trained for the Tokyo Olympics, which will be her second time competing in the Summer Games. Simone is looking to win four individual golds and a team gold in Tokyo and hasn’t lost a competition since 2013.

Earlier in the day, Simone and the other Team USA gymnasts offered a first look at the glitzy — and very pricey — leotards that they’re wearing for the Olympics. The group hit the mat to train at Ariake Gymnastics Centre in Tokyo.

The elite athletes donned two different leotards by GK Elite, the official apparel sponsor of the USA Gymnastics national team, with each one custom-made for the woman wearing it and decked out in about 3,500 Swarovski crystals. 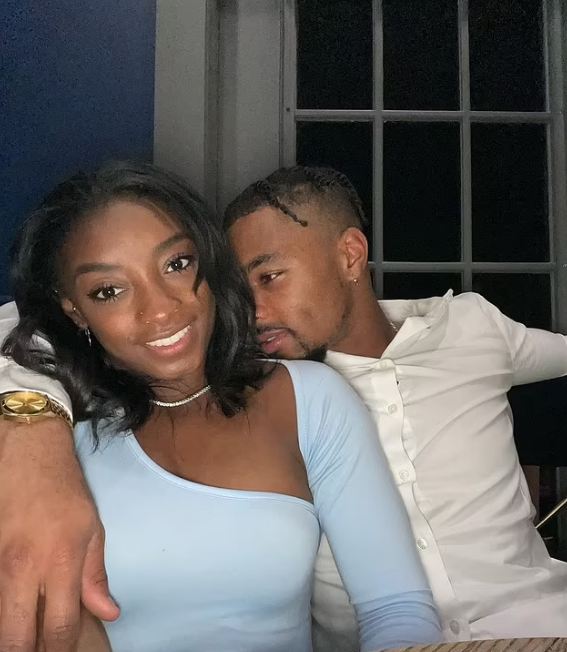 Those crystals were all hand-applied, with 75 people directly involved in the hands-on production of every leotard. While GK Elite has kept the official price tag of the uniforms under wraps, they are estimated to be worth $700 to $1,200 each — and are part of a larger Olympics wardrobe valued at around $12,000 per gymnast.

Simone Biles, Jordan Chiles, Sunisa Lee, and Grace McCallum all wore matching black and rose gold leotards, which the brand said have a ‘dynasty’ theme and are ‘a celebration of all that has led the USA to being a powerhouse gymnastics team and country paying homage to athletes and designs of the past, while preparing for the future.’ 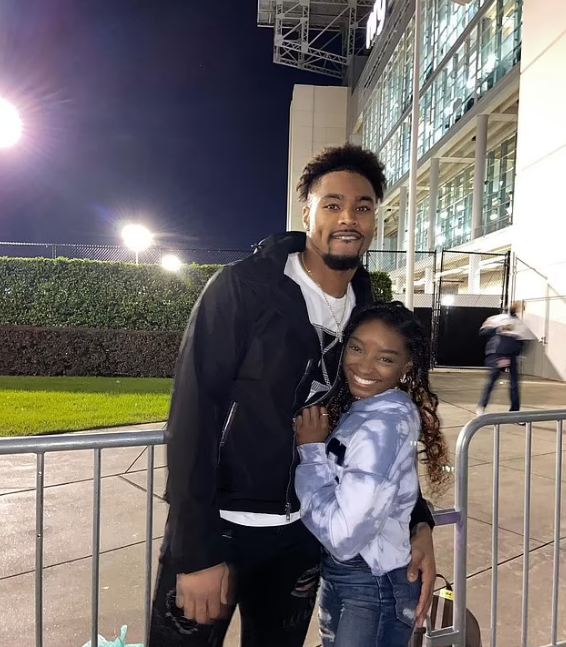 GK Elite says that the leotard was inspired by the Tokyo 2020 torch, with a front design that mimics the flame.

Each one is decorated with 3,515 hand-applied Brilliance and Blush Swarovski crystals, and finished off with a crystalized USA on the right hip, an embroidered GK logo on the left hip, and a USA flag sewn on the right sleeve.