He earned nearly $40 million dollars in 2019 thanks to a successful world tour before the pa-ndemic hit. And Travis Scott used his immense wealth to give back to his hometown community on Tuesday with a toy drive in Houston, Texas. 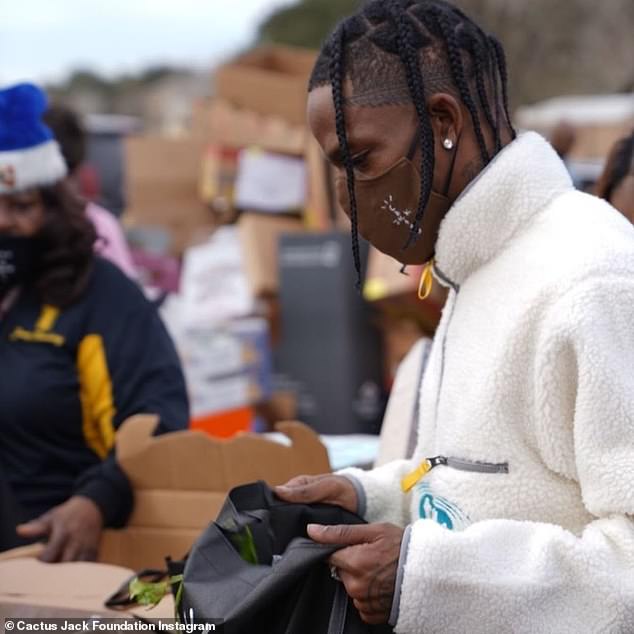 The 28-year-old rapper was seen on the front lines distributing gifts, while his two-year-old daughter Stormi Webster helped to hand out the presents. 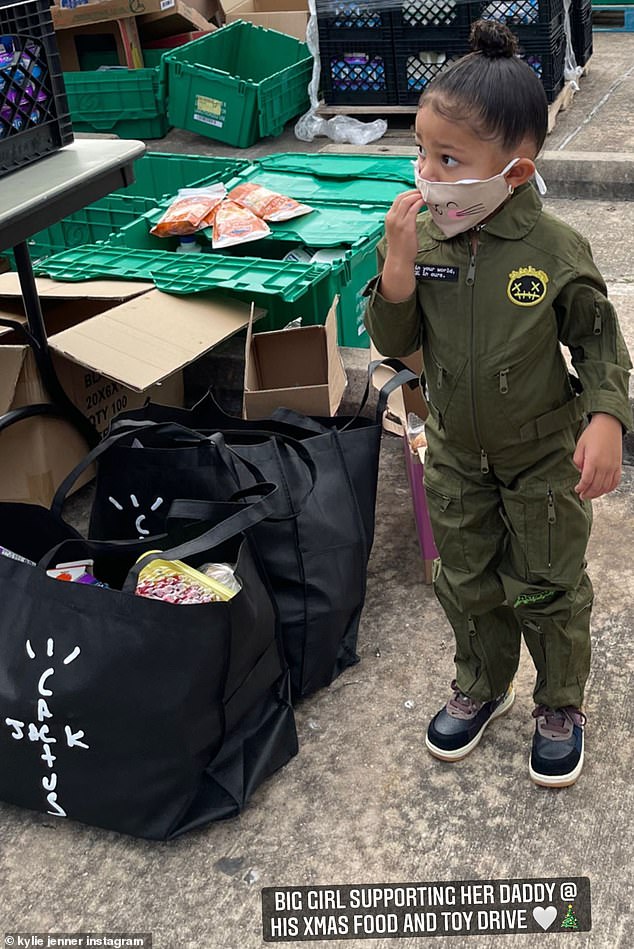 Travis’ Cactus Jack Foundation shared glimpses of the toy drive, including a photo of the Sicko Mode rapper helping to fill reusable shopping bags with goodies. 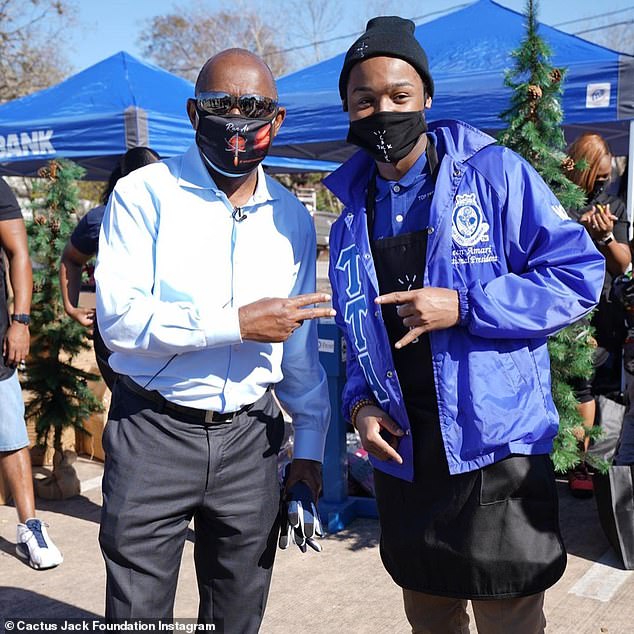 He stayed warm on a chilly day with a fleece jacket. The musician did his best to slow the spread of the novel Covid-19 by wearing a brown mask featuring the Cactus Jack logo. 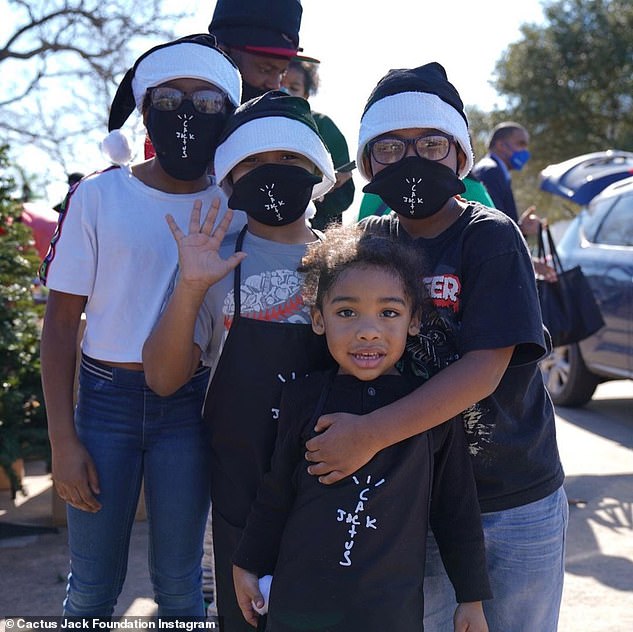 Travis’ ex Kylie Jenner also joined in on the charitable endeavor, though she didn’t appear to be pictured there.However, she shared a photo to her Insta Stories of their daughter Stormi looking happy to help out her father. The adorable toddler was seen in a snap posted to Kylie Instagram Stories wearing a cool dark green jumpsuit with copious pockets and Travis’ Cactus Jack face logo embroidered below her shoulder. 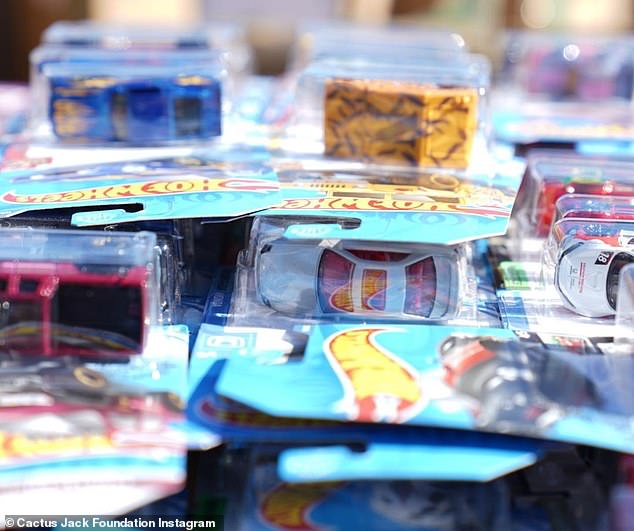 She had her hair tied up in a bun and wore a cute kitty cat mask.’Big girl supporting her daddy at his Xmas food and toy drive,’ Kylie captioned the picture. Travis’s giveaway was put on by his foundation with the participation of Houston Mayor Sylvester Turner, who posed in one of the foundation’s photos. 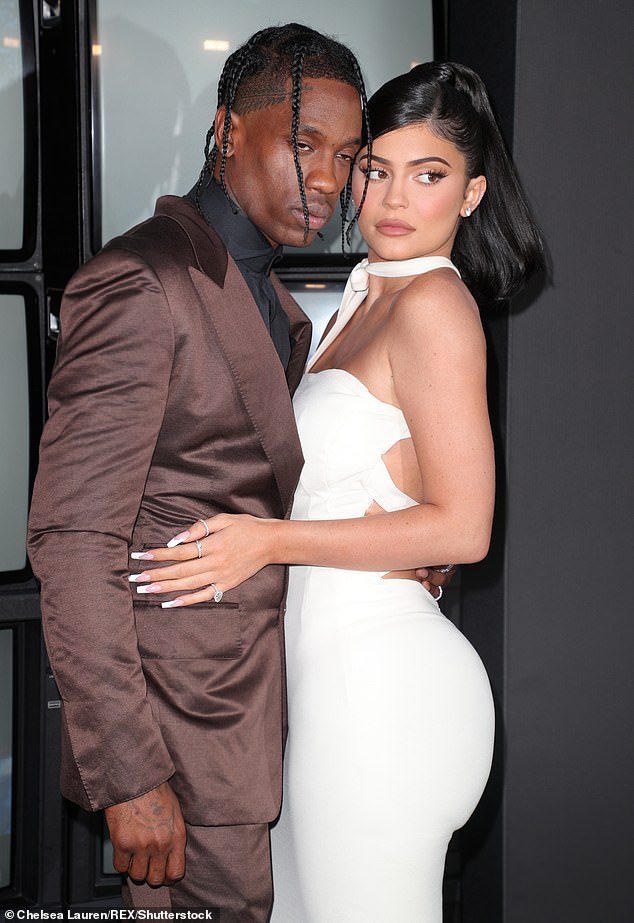 The group set up shop in the Sunnyside Park neighborhood and ran a contact-free drive, in which those looking for assistance had to drive through in cars in order to get gifts and supplies. Each family got food for holiday meals, including fruits and vegetables, small Christmas trees, comforters to help stay warm, and shoes. 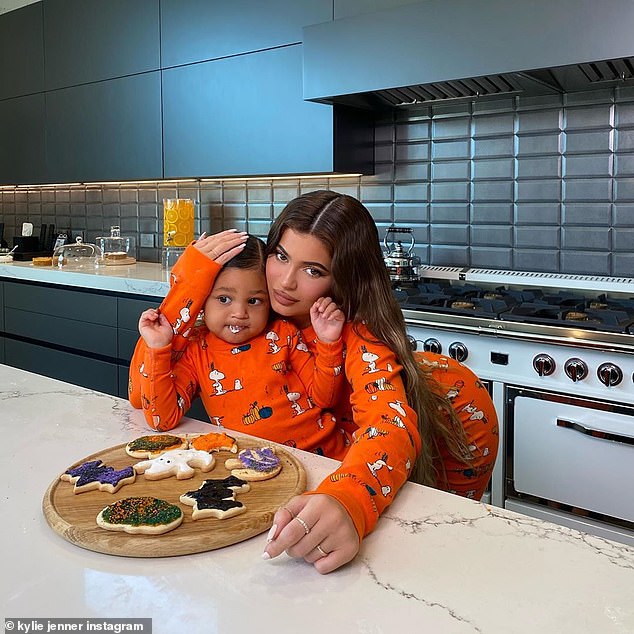 Personal protective equipment to slow the spread of the novel Covid-19 was also distributed. Travis and his organization handed out 2,000 toys to 1,000 children from three local elementary schools. There were even high-profile politicians joining in the food and toy drive, including Representative Sheila Jackson Lee and city councilmembers Carolyn Evans-Shabazz and Edward Pollard.

Though Travis and Kylie have kept their relationship platonic since spl!tting in September 2019, they have continued to be engaged co-parents for their daughter. The two regularly spend time together with Stormi and have helped put on opulent celebrations with her for holidays. In February of this year, Kylie told Harper’s Bazaar that she and her ex will always make sure their daughter is taken care of.

‘We’re like best friends. We both love Stormi and want what’s best for her. We stay connected and coordinated. I think about [my parents] in situations with Stormi, what they would do. They were very hands-on with me, and I want the same for Stormi.’