A Bla*k teenager from Florida broke the 200-meter record of tra*k phenomenon Usain Bolt at the American Tra*k League meet on Monday. In Jacksonville, Erriyon Knighton won the U18 race with a time of 20.1, beating Bolt’s 2003 record by just 0.02 seconds, NBC Sports reports. The Tampa Hillsborough Hi*h School student now ranks seventh among Americans in the 200m of this year and 13th since the start of 2019. At 17 years old, Knighton outran 25-year-old Olympic 100m favorite, Trayvon Bromell, who had the fast-est 100-meter with a time of 9.88 this year.

Others on the field included two Zharnel Hughes and Adam Gemili of Britain. Hughes br*ke Jamaican High School sprint records seven years ago and Gemili ranked fourth at the 2016 Olympics and 2019 Worlds match, according to NBC Sports.

Knighton is now qualified to race at the U.S. Olympic Trials which will begin in just two weeks along with the two other runners who came in behind him. He’ll be the youngest Olympic male runner in tra*k and field since 1964 when Jim Ryun represented the U.S. The teen also owns the record for the fast-est 100m with a time of 10.16 — only .01 seconds off the previous U18 record. To be eligible for the under 18 matches, World Athletics requires runners to not turn 18 within the same calendar year, The Washington Post reports.

Knighton only turned 17 in January. The student was first approached by his football coach to join the track team his freshman year because he was a sprinter, according to The Hill.

The 6-foot-3 wide receiver had initially been off-ered to play at three football household names: the University of Alabama, the University of Florida and Florida State University. He ultimately decided his junior year he would run professionally instead. 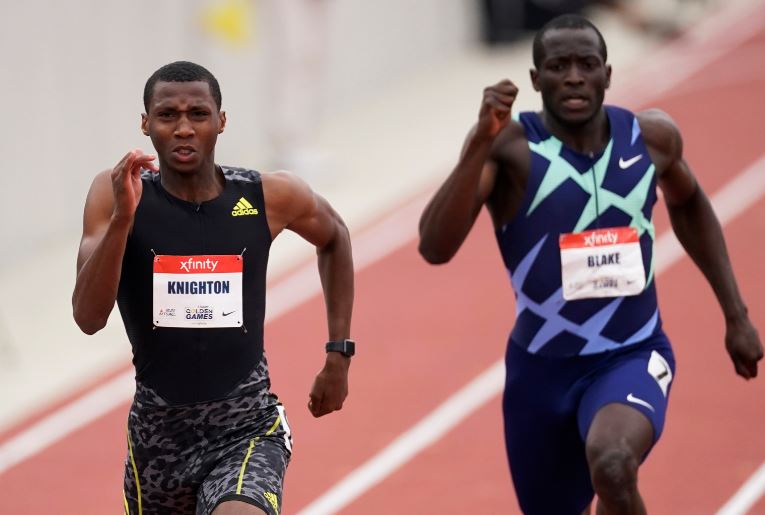 “Knowing that I grew up around football my whole life, and receiving a lot of D1 offers, it was a tough decision, but it was also a no-brainer,”Knighton said back in February. “In tra*k, the success of my career is fully in my hands and I know that I can do it.”