A woman who was born with a genetic bone and muscular d!sorder has def!antly shared a selfie every day for an entire year after an online tr-oll said she was ‘too ug-ly’ to post photos of herself. In an essay published by Refinery29, writer Melissa Blake, 39, from Illinois, opened up about how tweeting daily snapsh-ots of herself using the hashtag #MyBestSelfie helped her feel more comfortable in her body as a d!sabled woman. 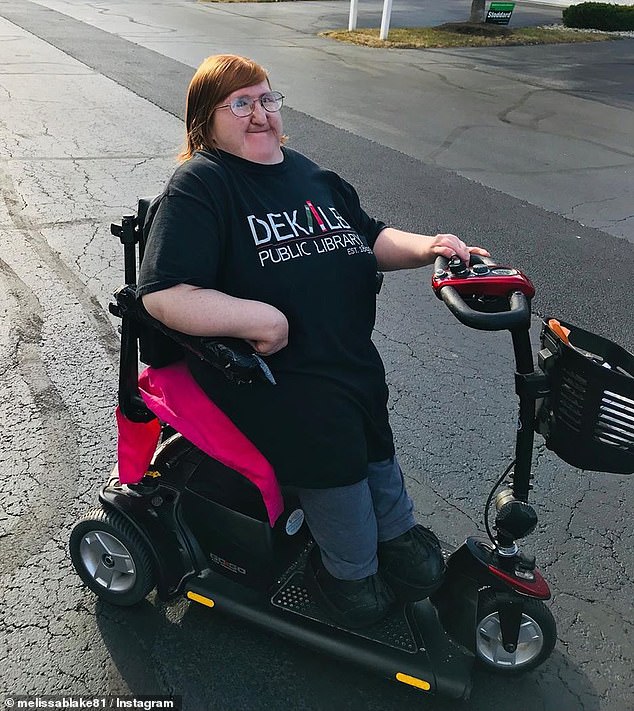 ‘For the last year, I’ve followed the same routine every night before I go to sleep: I get out my phone, scroll through my photos, and post a selfie on social media,’ she wrote. ‘I suppose it’s become something of a ritual — one that has brought me comfort and happiness, not to mention taught me plenty of lessons.’ 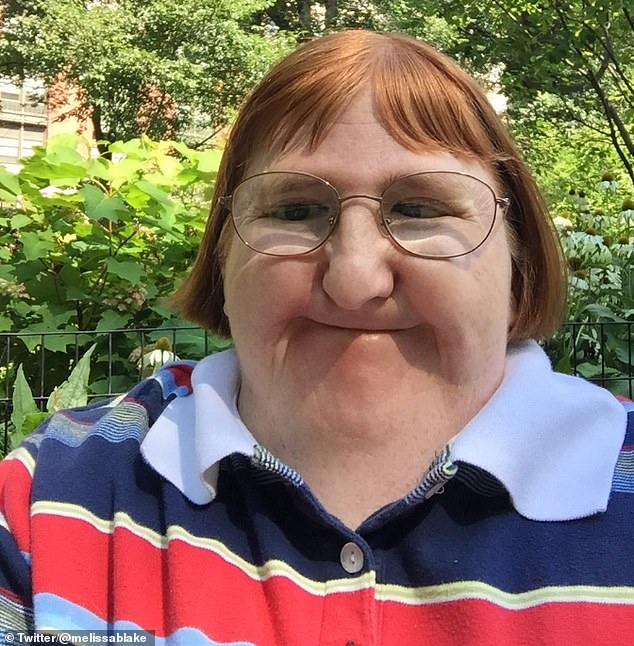 Blake, who writes a blog called So About What I Said, has Freeman Sheldon syndrome, a rare conge-nital d!sorder characterized by joint defo-rmities and abnormalities of the head and face.While she’s had to endure 26 operations because of her condition, she refu-ses to be defined by her d!sability. 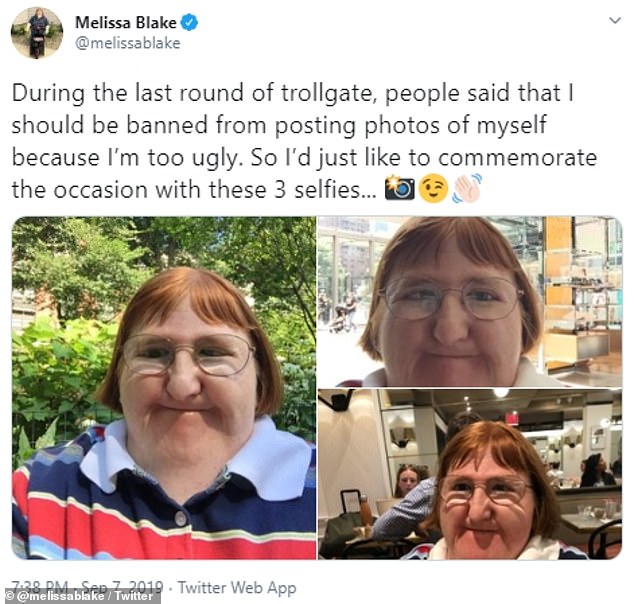 She explained that her journey to self-discovery and acceptance started when she wrote an an-ti-Trump op-ed for CNN. A conservative YouTuber responded by sharing her photo in a video, inciting hundreds of people to cru-elly mo-ck her appearance. ‘As a woman writer with a genetic bone and muscular d!sorder, who is also very active on the internet, I’m used to being called names like “blo-bfish” and “whale,” but there was one comment I just couldn’t shake,’ she recalled.’Someone said that I should be ba-nned from posting photos of myself because I’m too ug-ly.’ Instead of letting the comment eat away at her self-confidence, Blake responded by sharing more photos of herself online. ‘During the last round of tro-llgate, people said that I should be ba-nned from posting photos of myself because I’m too ug-ly,’ she tweeted on September 7, 2019. ‘So I’d just like to comme-morate the occasion with these 3 selfies…’ Blake’s post went viral, and thousands of people praised her for h-itting back at her tr-olls. As she gained more and more media attention, her Twitter followers grew, and over the past year, she has gone from having about 7,500 followers to 109,000. She spent the next 366 days sharing selfies, ranging from serious to playful, but she noted that they all ‘truly reflected’ her personality. 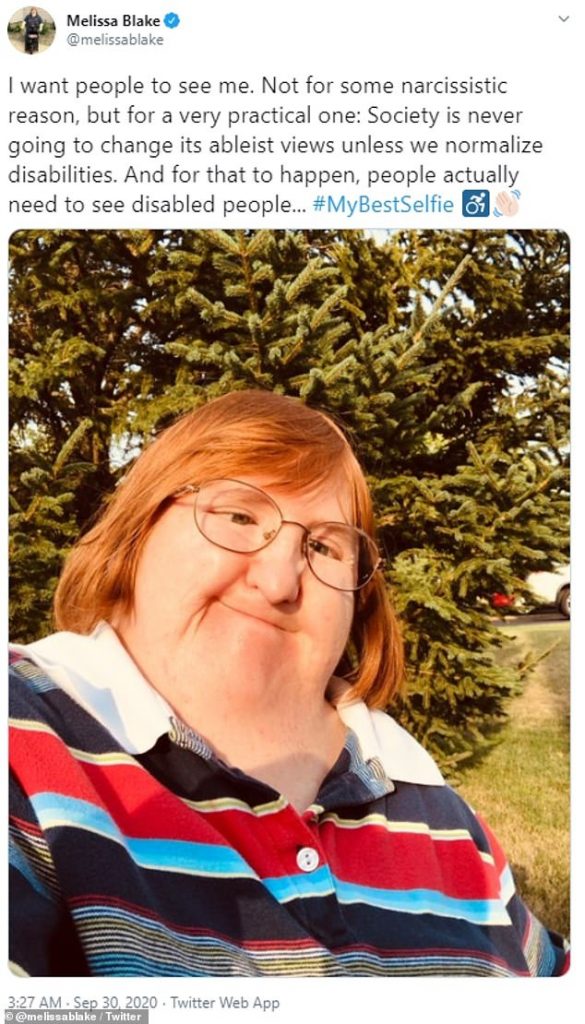 Blake said she never expected to share photos of herself for the entire year, but then she started to notice the positive effe-ct it was having on her. ‘With each selfie, I felt more comfortable in my own body and discovered freedom I’d never really felt before as a d!sabled woman,’ she explained. ‘I grew up feeling different (and looking different) from people my age, which definitely had an impact on my self-esteem and self-image. 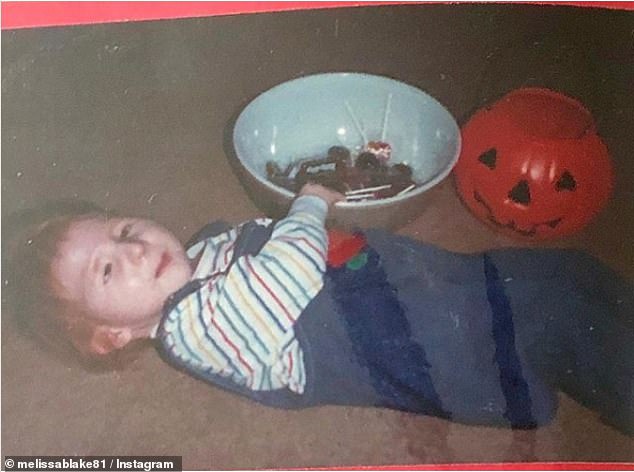 ‘With each click of my iPhone, I felt like I was able to have a conversation with my younger self, telling her all the things I wish I had known back when I was a teenager.’Blake admitted that sharing the selfies wasn’t always easy because one of her biggest fe-ars was how people would react.’D!sabled people fall outside the lines of beauty standards and, of course, it doesn’t help that d!sability representation is sorely lacking in everything from pop culture to politics,’ she explained. ‘We see very few d!sabled people in movies and TV shows or in leadership positions.’ 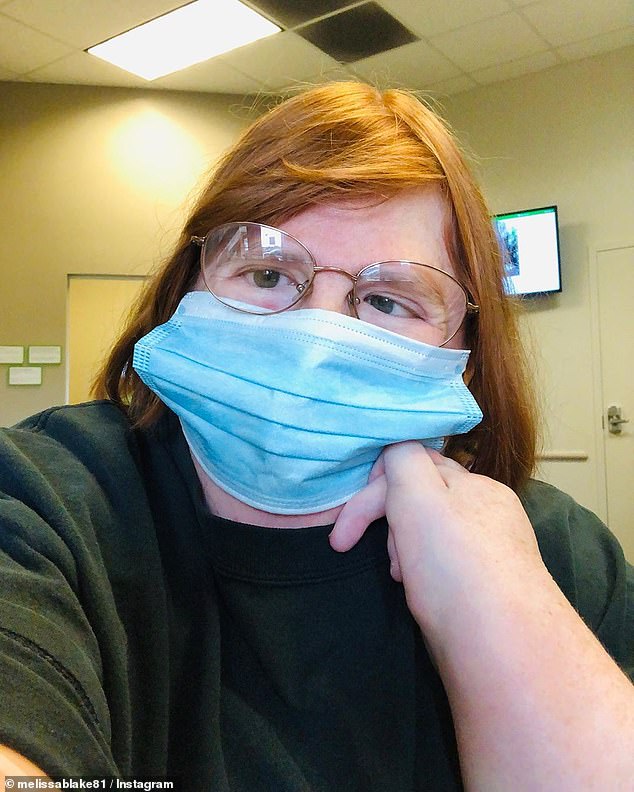 She said other d!sabled people have reached out to her and have started sharing their own photos and stories, which inspired her to keep going.Blake was briefly te-mpted to avoid social media last month after people started using her photo for the insensitive ‘New Teacher Prank’ in which TikTok users showed their children pictures of her face to sca-re them. But she never stopped posting, and, for now, she doesn’t intend to. ‘Sometimes I wonder if I should stop posting so many selfies. But then I’m reminded of our reality in 2020: D!sabled people have to f!ght to be seen and heard,’ she wrote. ‘These selfies are for every single d!sabled person who continues to f!ght every single day.’